The third day of the read-a-thon was a bit busier for me than the previous two days I had to visit the doctor for a routine appointment. Read-a-thon wise the day was…well, a dud. I read zero pages, didn’t do a challenge, and I didn’t stay up and participate in the chat (2am was too late y’all).

With day three behind me I approached the fourth day of the read-a-thon with renewed zeal…. and didn’t end up reading in the morning, but I totally surprised myself by the end of the day and I think I’m back on track (kind of).

The second day of this read-a-thon went much better than the first, at least as far as reading was concerned.

I didn’t participate in any of the challenges, though I did think about them. Infinite Ink’s challenge (more info here) sounded particularly interesting… So I thought I would say something here instead.

For this challenge, I want to hear all about your favorite literary OTP.  Tell me why you ship them.  Tell me how perfect they are for each other.

I have to admit that I don’t have a single OTP, and most of my preferred OTPs are not by any definition canon. So thinking of a canon based OTP has been a bit of a challenge, but I think I’ve managed to come up with a couple, one of which was inspired by Crystal’s example on Infinite Ink. So here goes…

I was first instroduced to Syaoran and Sakura through the anime Card Captors, and I just fell in love with the characters and the world. Then I read the manga on which the series was based, and it was awesome. So when I heard that CLAMP were re-using the characters in Tsubasa I had to read it too.

I ship Syaoran/Sakura because they are just adorable together. It was really fun in both mangas watching them fall in love with one another, and the other characters’ reactions to their relationship.

If you’ve never read a manga before, then I totally recommend anything by CLAMP as a great place to start. They typically write really cute romances with adventure and magic.

Alanna & George from The Song of the Lioness Quartet by Tamora Pierce.

I’m afraid I’ve been an Alanna/George shipper from the start. I know a lot of people wanted Alanna to be with Jon, but I always felt that Alanna would have to bend too much for the relationship to work long-term. I ship them primarily because George makes Alanna laugh and take life less seriously – sometimes she can be too serious, and life has to have fun times too. I also ship them because George is always there for Alanna even when she’s made it pretty clear that she just wants them to be friends.

The first day of this challenge was both a resounding success and a complete disaster.

I didn’t do much reading at all. Like almost none. However, I did manage to participate in a challenge (see below) and in the Twitter chat which was fun and hectic.

The Book Monsters held a scavenger hunt (you can find more details here) and here is my entry: 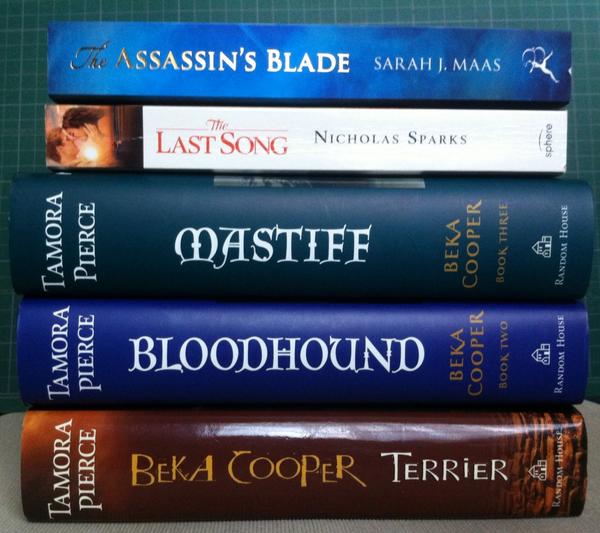 It was quite fun doing this challenge.

The Bout of Books read-a-thon is organized by Amanda @ On a Book Bender and Kelly @ Reading the Paranormal. It is a week long read-a-thon that begins 12:01am Monday, August 18th and runs through Sunday, August 24th in whatever time zone you are in. Bout of Books is low-pressure, and the only reading competition is between you and your usual number of books read in a week. There are challenges, giveaways, and a grand prize, but all of these are completely optional. For all Bout of Books 11 information and updates, be sure to visit the Bout of Books blog. – From the Bout of Books team

As I am currently running super behind both in signing up for this Bout of Books, and in blog posts in general, I have decided to combine what would normally be two posts… Sorry in advance if this post gets super long!!

So without further ado, here are my goals for Bout of Books 11.

Time Devoted To Reading … I think I’m going to go with the same goal as I did with Bout of Books 10, I’m going to aim to read about 2 hours a day for the whole seven days.

My Goals for Bout of Books 10:

Books I want to Read:

These are the books which are next in my TBR pile. I doubt I will manage to read all of them, but it would be nice to make a dent into the stack. I’m going very much by my mood this time, so which ones I read will definitely depend on how I feel on that particular day.

Good luck and happy reading to everyone else entering!

This post was due to be posted on the 19th May, so you can tell I am running a little behind.

Today was a good day, but . . . it failed on the Bout of Books front. Another day when I got zero pages read. But whilst I’m disappointed I didn’t read, I’m not unhappy. I had a great day with my family instead.

First I want to talk about the goals I did achieve. Read at least 100 pages a day. I might not have technically achieved this – as I didn’t read 100 pages every day – BUT I still managed to beat the goal (just) of 700 pages in a week. So I consider this a win! Finish reading DANCE OF SHADOWS by Yelena Black. This was a case of I started this book before Bout of Books and I wanted to finish it. Read at least one other book. And I managed this too. After DANCE OF SHADOWS I picked up and read EVERNEATH. I’m really proud of this, as it’s been a while since I’ve managed to fit two books into my week.

There were only two goals I failed to achieve in Bout of Books 10. I didn’t take part in a Twitter chat. This was mainly due to timing issues. I missed the first chat because it was dinner time, the second chat because I was too tired to stay up until 2am when it started, and the third and final chat I completely forgot about until it was over. I also didn’t participate in a Challenge. I totally meant to do this, it just didn’t happen.

Overall, I am very happy with how Bout of Books 10 went. Although I didn’t achieve all my goals, I don’t think 3 out of 5 is bad.

I am also planning to take part in Bout of Books 11 which will run from August 18th to August 24th. I hope to see you guys there, and I also hope everyone had as much fun with Bout of Books 10 as I did.

Today I did not read anything or do anything bout of books related (apart from write this). And you know what? I’m kinda okay with that. I mean, I would have liked to have read 100 pages today, but I’m not disappointed that I didn’t. I just wasn’t in the mood. The sun was out and I wanted to watch one of the T20 games on Sky – I saw Essex beat Middlesex by 8 wickets. It may not have been a good day reading wise, but I did have a brilliant day overall. I hope you had a good sixth day too.

Today procrastination was very much my king.

With just pages left until the end of EVERNEATH I found it very hard to motivate myself to start. For a while I crawled along a page at a time, having to stop and walk away at the end of them. Then I had to take a break from reading altogether for several hours, and when I got back I finally forced myself to read without stopping. I’m glad I did, as I really enjoyed the last little bit of EVERNEATH – there will be a review for it up at some point in the future.

I think I am going to leave it here for today’s bout of books, and start a fresh tomorrow.

Today the procrastination hit… No, that’s not exactly fair. I had some stuff to do in “real life” and that cut down on my reading time today. It’s nobody’s fault, but I knew it was coming so I should have planned for it. I didn’t quite manage my goal, I was one page shy but I’m not disappointed as I’m 200+ pages ahead of my goal for the whole of bout of books. I think tomorrow’s going to be difficult as I’m going to be finishing EVERNEATH and starting a new book. But I could be wrong.

So I managed to double my reading goal again 🙂 I decided to pick up my copy of EVERNEATH by Brodi Ashton as the second book to read this challenge, and so far I’m gald that I did so. It was a bit daunting actually starting it, but once I got going the pages just flew by. I’m hoping for the same tomorrow. Fingers crossed.

After the success of yesterday, it wasn’t as difficult to pick up DANCE OF SHADOWS and dive straight back in. In fact, I managed to find the time to complete it and write a review for it (which won’t be going up for a while, sorry). I’m very happy. This is the first book I have managed to finish reading since the end of April, which while it doesn’t seem that long ago also means I’m not getting through my TBR pile. I am VERY pleased with today’s reading progress. Hopefully this will continue on into tomorrow 🙂

Hi I’m Becki, welcome to The Flutterby Room. Thank you for stopping by. We have reviews for all sorts of books, and a few unboxings of book based boxes.
I have an MA English from the Open University, and a BA (Hons) English with Creative Writing from University College Falmouth. The Flutterby Room is the place where I share my love of books and reading.