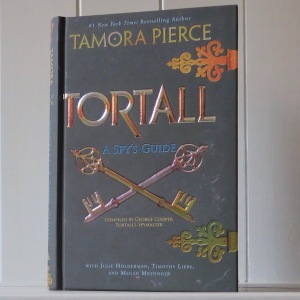 The secrets of Tortall are revealed. . . .

As Tortall’s spymaster, George Cooper has sensitive documents from all corners of the realm. When Alanna sends him a surprising letter, he cleans out his office and discovers letters from when King Jonathan and Queen Thayet first ascended the throne, notes on creating the Shadow Service of spies, threat-level profiles on favorite characters, Daine’s notes on immortals, as well as family papers, such as Aly’s first report as a young spy and Neal’s lessons with the Lioness. This rich guide also includes the first official timeline of Tortallan events from when it became a sovereign nation to the year Aly gives birth to triplets. Part history, part spy training manual, and entirely fascinating, this beautiful guide makes a perfect gift and is ideal for anyone who loves Alanna, King Jonathan, Queen Thayet, Kel, Neal, Aly, Thom, Daine, Numair, and the unforgettable world of Tortall! (Blurb from Amazon.co.uk)

TORTALL: A SPY’S GUIDE was not what I expected. From the beginning I found it pretty obvious that Tamora Pierce didn’t write the book it was more of collaboration, because there was something in the voice that just didn’t sit right for me. I also feel quite a lot of the content is superfluous, there to bulk the book out. That being said, I did find quite a lot of it an interesting read. If you’ve read all the previous books set in Tortall to date, then there is a lot of background information that is interesting – especially through the perspective it is written.

There is no obvious chronology in how the sections are ordered, which makes some sense as the premise is that George Cooper compiles the guide with what he finds when he cleans out a room. There are dates on most of the ‘documents’ but I still found it confusing at times. It is also very obvious that these are ‘spy’ notes, which I thought was neat – it gave some interesting insight into the political climate in Tortall at the beginning of Jonathan’s reign, and how certain characters were initially viewed that you just don’t get in the books. There are definitely a few surprises hidden in there.

If you are a fan of Tamora Pierce and the world of Tortall and are looking to know a little more about the world, then there are things in TORTALL: A SPY’S GUIDE that will delight you. Just be aware that there is no overarching storyline that ties everything together within the book. There is a bestiary, which has some lovely illustrations of the creatures, which was one of my favourite sections in the guide. There are plenty of appearances of familiar characters throughout the book, which I really enjoyed. So whilst TORTALL: A SPY’S GUIDE was not what I was expecting, it is a good stopgap until Pierce’s next instalment in the Tortall universe.

Hi I’m Becki, welcome to The Flutterby Room. Thank you for stopping by. We have reviews for all sorts of books, and a few unboxings of book based boxes.
I have an MA English from the Open University, and a BA (Hons) English with Creative Writing from University College Falmouth. The Flutterby Room is the place where I share my love of books and reading.