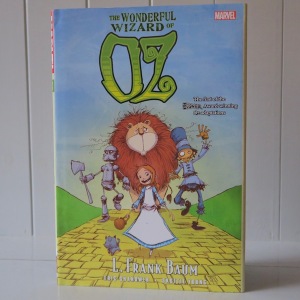 OFF TO SEE THE WIZARD!

With Marvel’s The Wonderful Wizard of Oz, an American fantasy comes to life in a classic comcis retelling! Shortly after its initial publication in 1900, author L. Frank Baum put his children’s literature in context: It was written “solely to please children of today. It aspires to being a modernized fairy tale, in which the wonderment and joy are retained and the heartaches and the nightmares are left out.” Baum died 19 years later, but only after leaving behind a legacy of Oz-inspired fantasy 13 sequels long – a legacy that was augmented by the 1939 MGM picture starring Judy Garland that took an already beloved story and turned it into a cultural institution.

Writer Eric Shanower (Age of Bronze) and artist Skottie Young’s (New X-Men) adaptation is the kind of artistic achievement that proves – if any proof was further needed – that the story of Dorothy and her journey down the mythical yellow brick road is just as magical, entertaining and relevant to the children of today as when it first entranced a generation 110 years ago.

Delving into some of the less familiar elements of Baum’s story, Shanower and Young reveal new and exciting layers – while still translating its most timeless elements.

The Scarecrow’s still looking for a brain, but did you know how it was he got stood up in the cornfield to begin with? The Tin Woodman is still searching for a heart – but for many, his tragically humorous tale of cursed romance has remained untold. Readers whose only exposure to Baum’s mythos is the film will be pleased to discover that Shanower’s script honors the original text. And Young makes his move into the upper echelon of comic artists – a moment his loyal core of fans have been waiting for – with his revelatory work on Shanower’s script. His fearless portrayals of Dorothy, her travling companions, and the alternately dark and charming world of Oz – in particular the Wizard himself – in sum amount to a modern masterpiece.

THE WONDERFUL WIZARD OF OZ by L. Fank Baum in this edition has been adapted by Eric Shanower and illustrated by Skottie Young. It tells a recognisable story to those familiar with the film The Wizard of Oz (1939) but remains true to Baum’s original work, with Shanower and Young still managing to add their own touch to the story. The story follows the story of a girl called Dorothy who lives in the middle of the great Kansas prairies with her aunt and uncle, and her dog Toto. A tornado hits her uncle’s farm and Dorothy gets caught in the house with Toto, which gets blown away and ends up in a fantastical place called Oz.

As soon as I saw Young’s gorgeous illustration on the front cover of this book I knew I wanted to read it. I’ve never read Baum’s original work, but I have seen several films based on his novels and I was curious about what was inside. I was not disappointed. THE WONDERFUL WIZARD OF OZ is everything I hoped for. The story is interesting and compelling, and the illustrations just blow me away. Whether you’re a fan of Baum’s original work, the 1939 film, or just like comics I highly recommend that you give this book a try.

The storyline of THE WONDERFUL WIZARD OF OZ was pretty much what I was expecting based on the film. There are some changes like Dorothy doesn’t have the ruby slippers from the film; Shanower and Young chose to go with how (I believe) they were described in the book. I can’t comment on how similar this book is to the original, but from my perspective of just watching the film there were plenty of interesting additions to the storyline, which I thoroughly enjoyed. It was nice to explore a bit more of Oz, though the bones of the story remained the same.

Skottie Young’s illustrations were absolutely magnificent. I really enjoyed his style, and think they add another dimension to the story. They really brought the story to life for me. I really enjoyed how he imagined the characters and the places – they all have a distinct feel to them. I particularly love how he’s shown the main characters. The colours are really vivid and glorious, and really help to set the atmosphere. I was sold on Young’s cover, and I think his artwork really stands up to that promise. The illustrations made the whole story – the world – more magical for me. This edition of THE WONDERFUL WIZARD OF OZ adapted by Eric Shanower and illustrated by Skottie Young is truly magical.