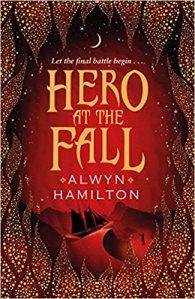 Hero at the Fall by Alwyn Hamilton

Once, there was a desert under siege, and no one to defend it . . .

The rebels are crushed: most are captured, burned out or dead. Except Amani, and it’s up to her to protect the survivors.

But how can one girl save a whole rebellion?

Then foreign armies begin advancing across the desert plains and the Sultan stars hunting the rebels through the streets of Izman.

Now Amani must prove that she’s not  just a  desert girl any more, that she’s learned a few tricks since then. . .

Here begins the final battle for the throne. Who will lead, who will triumph, who will live and who will die?

HERO AT THE FALL brings Alwyn Hamilton’s fantastic Rebel of the Sands trilogy to a spectacular close. It continues the story of Amani and the Rebellion after what looks like the end of their uprising: their story is not over yet. Amani must work out how to save the rebellion, and in doing so prove that she is more than just a desert girl as the final battle for the throne begins. There is more than just the Sultan to be wary of, as foreign armies have begun advancing across the desert as the realm appears up for the picking.

This book blew me away: HERO AT THE FALL is an enthralling conclusion, and everything I hoped for in a final book to the Rebel of the Sands trilogy. It took me a while to read this book, not because of Hamilton’s writing but because I was nervous about whether this story would live up to my expectations – I’ve been burnt before – and I can honestly say that this book moved me. It did take me a while to get into but I honestly think that was more to do with me and my fears than the story itself, which sunk its claws into me and wouldn’t let go. I had to keep coming back and reading a bit more. And when I picked the book back up again I sunk straight back into the story.

Hamilton kept me guessing. When I started I honestly could not have predicted how the story would end. I hoped, but I didn’t know. I thought there were a lot of surprises along the way, and a lot of twists and turns in the plot. There are some really magical moments in the story, and there are some really human ones too. I really enjoyed, as in the previous books, that the story was broken up by chapters that read like pages from another story that allow us as readers to learn more about the bigger picture – they felt very like a fairy tale. They also served as a nice way to take a breath from some of the action.

There is a lot going on in HERO AT THE FALL, but Hamilton does not skimp on her characterisations. In fact, although this story and series tells the story of the Rebellion it is very much Amani’s story at its heart, which I think is why I love it so much. Amani has come a long way since we were first introduced to her in REBEL OF THE SANDS, and I think it really shows in this book. The members of the Rebellion are well written and I enjoyed seeing familiar faces, and learning what became of them.