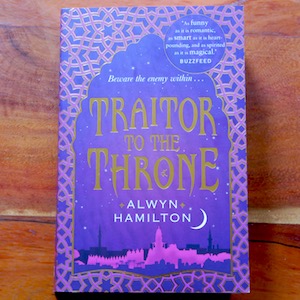 Traitor to the Throne by Alwyn Hamilton (UK edition)

This is not about blood, or love. This is about treason.

Amani has always been more gunpowder than girl. But as the Blue-Eyed Bandit her powers have gone from strength to strength – as has the rebellion she risks her life for.

Then a brutal kidnapping leads her straight to the Sultan’s palace, and she is forced to return to her desert-girl’s instincts for survival. Betrayal, cunning and espionage are a way of life here – and Amani finds she fits right in.

But with the ghosts of her past swirling all around her, Amani’d greatest fight may be to keep her own secret heart and desires under control . . .

TRAITOR TO THE THRONE is Alwyn Hamilton’s stunning sequel to REBEL OF THE SANDS, and the second instalment of the trilogy. Amani escaped Dustwalk and found the rebellion in the first book. Known as the Blue-Eyed Bandit to some, she helps the rebellion rescue those persecuted under Sultan Oman’s rule. Then she is brutally kidnapped and ends up in the Sultan’s palace, where she gains not only his attention but also that of his heir. Betrayal, cunning and espionage are the only way to survive, so Amani finds herself returning to her roots – the desert-girl’s instincts of survival that she honed growing up may just serve her well.

This book blew me away from the first chapter. TRAITOR TO THE THRONE is one of the best middle books in a trilogy that I have had the pleasure of reading. If you read and enjoyed REBEL OF THE SANDS then this book will be a delight. It has everything in it that I loved about the first book, and more besides. For the first time we get to see Sultan Oman, and see just what a formidable force he really is. The tension builds as the book progresses, and I can honestly say that I’m really excited for the third book (which unfortunately doesn’t come out until 2018).

I really enjoyed the opening chapter of this book, wherein Hamilton very helpfully summarises the events of REBEL OF THE SANDS. I last read that book in April of 2016, so I found the summary of the events a very useful refresher. I don’t know if this will be an issue if you read the books closer together. However, I really enjoyed the tone of this chapter – it read almost like a fairy tale. I also really liked the fact that there are hints in it about what might be coming next in the story – it got me really excited to dive into the meat of the story. Hamilton uses this style a couple more times in the book to great effect, and I really enjoyed it every time – it certainly helped to build the tension.

The plot of TRAITOR TO THE THRONE had me gripped from the start. I found the book to be real page-turner, and it was hard to put it down. I thought it was a tense, entertaining read – just what I wanted. Hamilton really built the tension through the narrative, and there were a few twists and turns along the way. As I’ve already said, the ending has me looking forward to the third book.

Amani serves, as she does in the first book, as a great narrator and main character. It was really interesting to watch events unfold through her eyes, and to see the return of some familiar faces as well as get introduced to some new ones. I know he’s supposed to be the bad guy, but I found Sultan Oman a really intriguing and charismatic character. He was definitely enigmatic too, and it was fun watching him and Amani face once another. I thought all the characters in this were well written, except perhaps Prince Kadir and his wives who I found a little flat. That is probably a reflection of having Amani as the narrator though, and it is only a small gripe to what is overall a really good read.

One thought on “Review: Traitor to the Throne by Alwyn Hamilton”