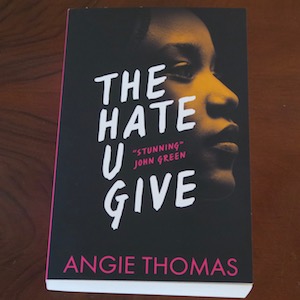 The Hate U Give by Angie Thomas (UK edition)

“What’s the point of having a voice if you’re gonna be silent in those moments you shouldn’t be?”

Sixteen-year-old Starr lives in two worlds: the poor neighbourhood where she was born and raised and the posh high school in the suburbs. The uneasy balance between them is shattered when Starr is the only witness to the fatal shooting of her unarmed best friend, Khalil, by a police officer. Now what Starr says could destroy her community. It could also get her killed.

THE HATE U GIVE is Angie Thomas’s debut novel. It tells the story of sixteen-year-old Starr who lives with her family in a place called Garden Heights; it’s a poor neighbourhood with a strong community. Starr and her brothers don’t attend the local school; instead they travel to a posh high school in the suburbs. This means that Starr lives something of a double life, so she can fit into both worlds. The balance is destroyed when Starr is coming home from a party with her best friend Khalil and they are pulled over by a police officer, and she witnesses him shoot and kill her unarmed best friend.

END_OF_DOCUMENT_TOKEN_TO_BE_REPLACED

‘There’s a lot of girls prettier than me. Anyone can look good. Talent – that’s not it, either. Everyone’s got talent. They train you up, they work on your voice. If it’s no good they change it in the studio. Talent’s cheap.’

Sara wants to be famous, and when the legendary rock star Jonathon Heat offers to train her up and pay for her cosmetic surgery, it’s like a dream come true. But what if there’s a hidden price? And is Sara willing to pay it . . . ?

Melvin Burgess is well-known for his young adult, social realist fiction since the publication of his novel Junk in 1996. Sara’s Face carries on this trend, with Burgess looking at the culture of celebrity and of beauty.