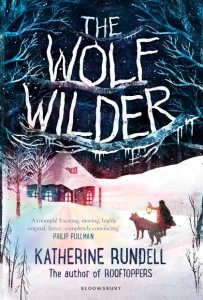 The Wolf Wilder by Katherine Rundell

Feodora and her mother live in the snowbound woods of Russia, where their closest neighbours are wolves. Feo’s mother is a wolf wilder, and Feo is a wolf wilder in training. Like the wolves, Feo has learnt to be wary of humans – even before the soldiers arrive with their guns and threats. And when the soldiers do their worst, she goes on the run with just a fugitive boy and her wolves for company – to rescue her mother and to save her pack . . .

THE WOLF WILDER by Katherine Rundell reads like a Russian fairy tale. It tells the story of Feodora and her mother, they live in the snowbound woods of Russia. Feo’s mother is a wolf wilder, so Feo has grown up with wolves and has learnt to be wary of humans. So when soldiers from the Tsar arrive with weapons and take her mother away, Feo has no choice but to try and get her mother back.